Anatomy of a shoot - Pinup Zombies

Anatomy of a photoshoot - Pin up Zombies


You have already seen a couple of behind the scenes shots from one of our biggest shoots of last year in our blog entry on modelling not being always so glamorous, now for the full story of that shoot.

We had been wanting to shoot a 'B-movie' sci-fi or horror theme for a while and at the time there was a lot of interest in pin up zombies, which are always a lot of fun, so we thought we'd base a shoot around that idea. Though a 'B-movie' theme was the key driver for the shoot we wanted to achieve a 'big budget' film look, that meant a big location so we decided early on that shooting on an empty Westminster Bridge would be a fantastic location. You can't just turn up and start shooting within the Government security zone which meant that we had to make sure we had all the necessary permits and permissions in place before shooting, which would tie us down to a specific date and time so we would just have to hope that the weather (and other things as it happens) would be kind to us.

Initially we had a huge amount of interest from within the group of models that we shoot with and had about 40 girls wanting to shoot. We also had some top make-up artists and a great hair stylist on board as well. As the date of the shoot drew closer and people realised that it would be an overnight shoot quite a few people dropped out, then there were a few people who really wanted to be a part of it but were unable to make it, but we had enough girls to make it worth while.

As we assembled at a flat in North London, serving as our base for make-up, around midnight one Friday night the weather was a little chilly but the forecast was largely dry for the next morning. We planned to be on the Bridge ready to shoot before the sun came up.

Make-up was initially fun, with the usual chatter and fooling around making way for quiet industry as the make up artists began their transformational magic. 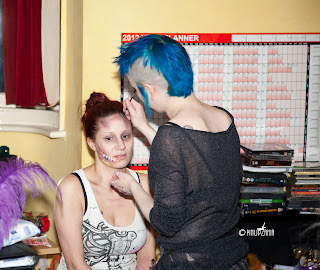 A good few hours later we were ready to start moving to the location, only we hadn't allowed for a Bus strike. There seemed to be a few buses running so we got on one heading in the right direction thinking we were going to be OK, only to be dumped off it a few stops later, this was everyone, not just us, attracting more than a few puzzled looks from the other passengers, it's not every day you see a scantily clad, attractive zombie on a bus, and found ourselves stuck rather in the middle of nowhere. We waited in vain for another bus but none turned up and in the end, as the tube was about to start running we made our way to the nearest tube stop. Eventually we arrived at the Bridge, a little more tired, hassled and stressed than we otherwise should have been and about an hour and a half later than we wanted. Luckily it was still empty enough to shoot so the girls had hair and make-up touched up and we started shooting. 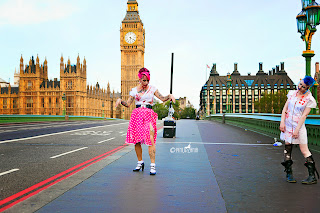 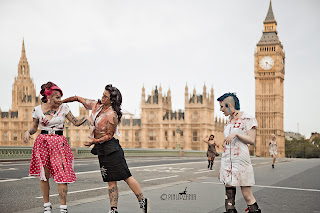 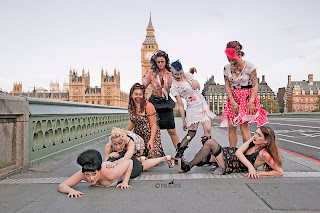 There were a few people about, joggers and the odd person on their way to work but whislt a few did a double take, we didn't attract as much attention as we might have elsewhere, it was almost as though this was a fairly normal occurance for London. Though we were fairly lucky with the weather in that it was dry, it was cooler than it should have been for the time of year so in between shots the girls had to put their big coats back on and try to get warm, this was one of those shots, that whilst the concept was fun, it wasn't all fun and games actually shooting. It was a long, tiring and cold and uncomfortable shoot, but we got exactly the sort of shots we were after. 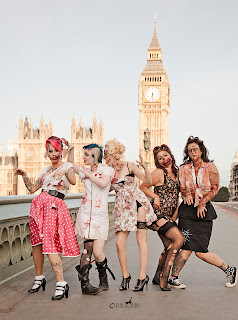 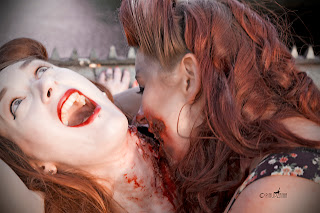 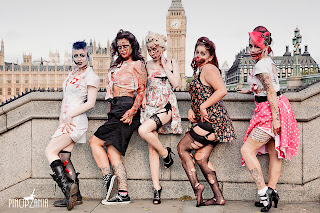 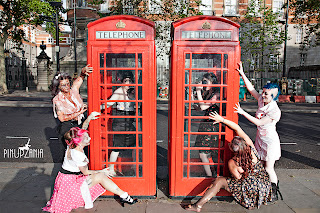