The First Pin Up

The 1st Pin Up


Of course, no-one can say for sure who the very first pin up was but a likely candidate would be Lydia Thompson, a dancer, comedian, actress and theatrical producer in the Victorian era. She began to make a name for herself on the London stage in the 1850s becoming famous throughout Europe for her dancing skill and the 'vivacity of her character'. She became known for performing Burlesque, then rather different from what we know as Burlesque today, and in 1868 set sail for America with her new 2nd husband and a troupe of girls, adpating English Burlesque for an American audience.

Though there were other performers of Burlesque in the U.S.A. at the time, Thompson is largely credited now with 'launching' Burlesque in America, she was certainly one of the most popular shows to go and see, touring throughout the latter half of the 1800s, both in the U.S.A. and back in England and Europe.

She would certainly have been one of the 'stars' of the time who started using publicity photos as 'business cards' and 'flyers' and as one of the biggest stars of the time qualifies as someone who achieved wide popular cultural appeal - so if she wasn't the first, Lydia was certainly one of the first who could be defined as a 'pin up'

Here are a couple of her publicity photo cards. 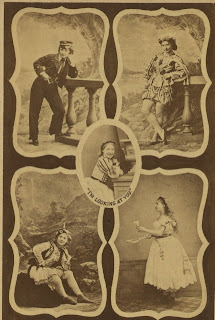 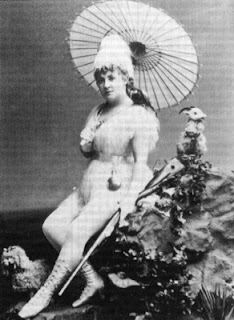